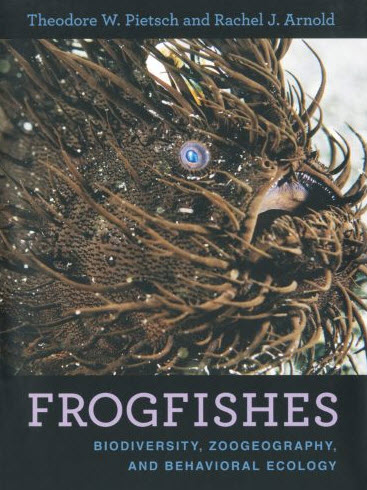 A new book about frogfishes, Frogfishes: Biodiversity, Zoogeography, and Behavioral Ecology, has been published by Johns Hopkins University Press. The book is authored by Ted Pietsch, University of Washington professor emeritus of aquatic and fishery sciences.

Pietsch explains in a UW release that frogfishes are highly camouflaged and feed by micmicking a sponge or algae-covered rock. They wiggle a lure to attract prey.

Pietsch also says, "This is a fish that 'walks' and 'hop'" across the sea bottom, and clambers about over rocks and coral like a four-legged terrestrial animal but, at the same time, can jet-propel itself through open water. Some lay their eggs encapsulated in a complex, floating, mucus mass, called an "egg raft" while some employ elaborate forms of parental care, carrying their eggs around until they hatch."

Here are some details about the book:

The book is available from John Hopkins University Press and Amazon.com.