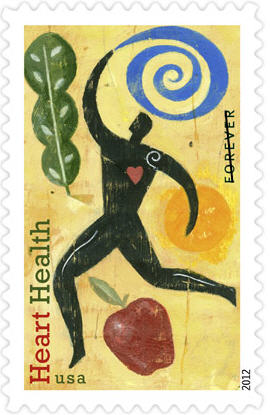 The U.S. Postal Service has announced it will release a Heart Health stamp in 2012. The goal of the stamp is to raise public awareness about the importance of maintaining a healthy heart and preventing coronary heart disease (CHD).

The design of the stamp includes a yellow sun, leafy green tree icon and apple. A striding man is featured on the stamp with a red heart on his chest.

Art director Derry Noyes teamed up with illustrator Nicholas Wilton to create the stamp, which will be released as a forever stamp next year.