Here are the latest posts about Snakes on Science, Space & Robots: 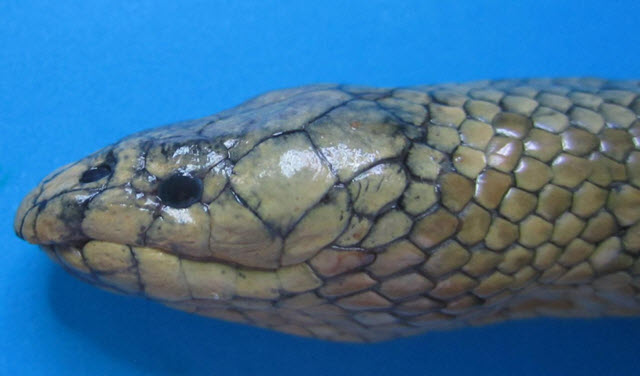 New Earth Snake Species Discovered in Mexico
A new species of orange and black earth snake has been discovered in east-central Mexico. (August 12, 2016)

New Venomous Snake Species Discovered in Costa Rica
Scientists have discovered a new species of venomous snake in Costa Rica. It was previously confused with another species. (July 18, 2016)

Silver Boa Snake Species Discovered in Bahamas
A new snake species named Silver Boa has been discovered on a remote island in the Bahamas. (June 3, 2016)

Videos of Snakes Eating Eggs Go Viral
A couple videos of snakes eating eggs have gone viral recently. In one video a snake eats eggs out of a bird's nest. (May 17, 2016)

8 Meter Python Captured in Malaysia May Be Longest Ever Caught
An 8-meter (26 feet) captured on the island of Penang in Malaysia may be the longest python ever caught. (April 11, 2016)

Massachusetts to Populate Island With Timber Rattlesnakes
The Massachusetts Division of Fisheries and Wildlife plans to populate a lake island with Timber rattlesnakes in a conservation attempt. (February 25, 2016)

Fossils of Ancient Snakes Discovered
Scienitsts have found fossils of the oldest known snakes. It pushes the snake evolution clock back about 70 million years. (January 28, 2015)

Shovel-Nosed Snake Swims Through Sand Better Than The Sandfish Lizard
Scientists use X-ray technology to determine that the shovel-nosed snake is a better sand swimmer than the sandfish lizard. (January 18, 2015)

Viper Gets Partially Eaten by a Centipede it Swallowed
A juvenile nose-horned viper swallowed a centipede only to have the centipede eats its way out of its lower abdomen. Both creatures perished. (April 18, 2014)

Scientists Discover Burmese Pythons Have Homing Abilities
A new study has found that Burmese pythons in South Florida can find their way home even when they are moved far away from their capture locations. (March 21, 2014)

Burmese Python Nearly 19 Feet Long Sets Record for Longest Ever Captured in Florida
A Burmere python, 18 feet and 8 inches long, sets record for the longest ever captured in the state of Florida. (May 20, 2013)