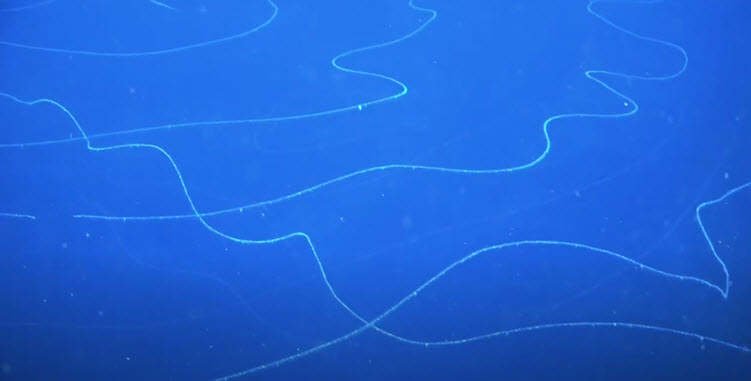 The footage of the giant siphonophore Apolemia is believed to be the largest specimen ever recorded. The siphonophere is a colony of tiny individual zooids that clone themselves into specialized bodies that string together. The zooids work together as a team and appear as one long creature. Apolemia have stinging cells and are also known as string jellyfish.

Wendy Schmidt, co-founder of Schmidt Ocean Institute, says in the announcement, "There is so much we don't know about the deep sea, and there are countless species never before seen. Our planet is deeply interconnected--what happens in the deep sea impacts life on land--and vice versa. This research is vital to advance our understanding of that connection--and the importance of protecting these fragile ecosystems. The Ningaloo Canyons are just one of many vast underwater wonders we are about to discover that can help us better understand our planet."

The ROV SuBastian was used to explore the canyons. The researchers say up to 30 new underwater species were identified. Some of the creatures observed for the first time in Western Australia include the bioluminescent Taning's octopus squid, long-tailed sea cucumber, and a number of other molluscs, barnacle and squat lobster species. Take a look: