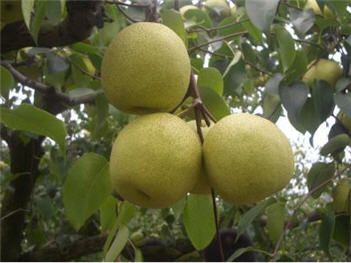 The first sequencing of the Asiatic pear genome has been completed by an international consortium of seven worldwide universities and institutions including the University of Illinois. The project was developed when a professor named Jun Wu from Nanjing Agricultural University in China spent a year in Korban's lab to study the pear using the U of I apple markers.

U of I plant molecular geneticist Schuyler Korban says, "Our role on the team was to work on the strategy for sequencing, analyzing the data, understanding some of the biological processes, and writing the manuscript. We ended up with an assembly that's 97.1 percent correct rather than 50 or 60 percent. Every plant genome is different, but the sequencing technologies have improved, we've learned from previous strategies, and the cost is definitely a lot less than when genome sequencing first began."

The European pear is the pear-shaped fruit most people in the U.S. are familiar with. The Asiatic pear is a round fruit that looks like a yellow apple. It is often advertised in U.S. grocery stores as an apple pear.

Korban says, "The Asiatic pear looks nothing like the European pear, like the Bartlett. The Asiatic pear is the most important commercial variety in China. It's sweeter, has a high level of antioxidants and is healthy like the apple, but it is higher in lignified cells so when you bite into it, you can feel the grittiness, making it higher in fiber. It's also more resistant to diseases including fire blight, which the European pear is susceptible to."