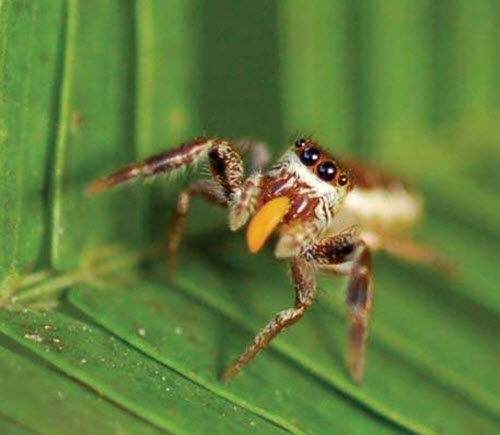 Spiders are known for being hunters and meat-eaters but there is one species that prefers a vegetarian diet. Bagheera kiplingi is a jumping spider species from Central America and southern Mexico that feeds predominantly on plant food.

The spider prefers to consume nectar and Beltian bodies (detachable leaf tips) from acacia shrubs. These shrubs also happen to be fiercely guarded by ants which also eat the nectar and inhabit the hollow spines of the plant. A female Bagheera kiplingi is holding one of the Beltian bodies in the photograph above.

The little jumping spider has to constantly avoid ants in order to obtain the plant nectar and Beltian bodies. The researchers say "the spiders get the job done through active avoidance of patrolling acacia-ants, relying on excellent eyesight, agility, and cognitive skills."

Research teams led by Christopher Meehan of Villanova University and Eric Olson of Brandeis University discovered the mostly vegetarian spider species in Costa Rica in 2001 and then in coastal Quintana Roo, Mexico in 2007. The Wikipedia entry says B. kiplingi has a diet that is over 90% Beltian bodies. The spiders also sometimes supplement their plant diet with animal prey, including ant larvae and eggs.

Meehan says, "This is the first spider in the world known to deliberately 'hunt' plant parts; it is also the first found to go after plants as a primary food source."

Villanova professor and study co-author Robert Curry says, "What surprised us most about discovering this spider's extraordinary ecology was to find it on the ant-acacias. This well-known mutualism has been studied by tropical ecologists for nearly 50 years, yet the spider's role was not noticed until Olson's discovery in 2001. We were lucky to find in Mexico an area where the spider is both exceptionally abundant and even more herbivorous than in Costa Rica."

The neotropical jumping spider Bagheera kiplingi may also be unique in another way. The researchers noted that the males may help to care for the eggs and young. They also found the spiders live and nest on the acacia plants in high densities.

The species was named in honor of Kipling with Bagheera referring to the black panther from The Jungle Book. A research paper on spider can be found in Current Biology.

Here is a video of the spider carefully maneuvering around many ants on an acacia plant (Vachellia collinsii).