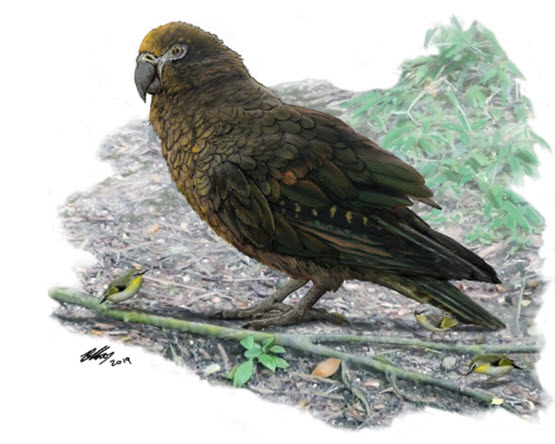 Australasian paleontologists discovered the fossil of an extinct giant parrot that once inhabited New Zealand. The bird stood up to 1 meter (3.2 feet) tall. It weighed about 7 kilograms (15.4 pounds). It has been named Heracles inexpectatus.

Flinders University Associate Professor Trevor Worthy says in the announcement, "New Zealand is well known for its giant birds. Not only moa dominated avifaunas, but giant geese and adzebills shared the forest floor, while a giant eagle ruled the skies. But until now, no-one has ever found an extinct giant parrot – anywhere."

The scientists say the parrot was about the size of the giant dodo pigeon of the Mascarenes. It is twice the size of the New Zealand kakapo, a large critically endangered parrot species.

The extinct parrot fossil was found in a group of fossils up to 19 million years old from near St Bathans in Central Otago, New Zealand. The region would have been a diverse subtropical forest when Heracles was alive. The giant parrot would likely have eaten fruit found in the forest but the researchers say its beak would have given it the ability to eat small animals.

Professor Mike Archer, from the UNSW Sydney Palaeontology, Geobiology and Earth Archives (PANGEA) Research Centre, says, "Heracles, as the largest parrot ever, no doubt with a massive parrot beak that could crack wide open anything it fancied, may well have dined on more than conventional parrot foods, perhaps even other parrots."

A research paper on Heracles was published in the Royal Society journal, Biology Letters.