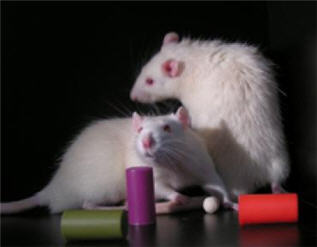 A new study of rats found that the more rats are sleep-deprived, the more some of their neurons take catnaps - with consequent declines in task performance. Even though the rats were awake and active, brainwave measures revealed that scattered groups of neurons in the thinking part of their brain, or cortex, are briefly falling asleep.

If human brains act the same then sleep-deprived people may also suffer from catnapping neurons and reduced mental capability. If you are too tired a group of neurons in your brain may decide to briefly go offline whether you like it or not. This could explain memory lapses, irritability and other behaviors associated with tired people.

"Such tired neurons in an awake brain may be responsible for the attention lapses, poor judgment, mistake-proneness and irritability that we experience when we haven't had enough sleep, yet don't feel particularly sleepy," explained Giulio Tononi, M.D., Ph.D., of the University of Wisconsin-Madison. "Strikingly, in the sleep-deprived brain, subsets of neurons go offline in one cortex area but not in another - or even in one part of an area and not in another."

The researchers explained in a release that they kept the rats awake past normal rat awake hours by introducing novel toys into their cages.

The study is yet more evidence that getting the right amount of sleep is likely crucial for all animals, including humans. Exactly how many hours of sleep humans need is a matter of debate, but it is probably more than most of the world's busy, stressed-out people are getting.

Findings from the study were reported online in the April 28, 2011 issue of the journal Nature.