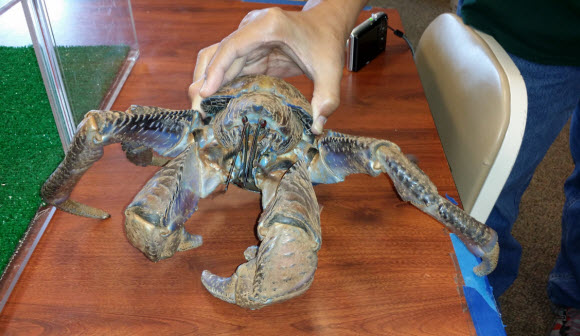 A coconut crab (Birgus latro) was located and captured on Oahu. The crab was crawling near Salt Lake Boulevard. The crabs are an illegal invasive species. The large hermit crabs can reach up to 3 feet in length.

The Hawaii Department of Agriculture (HDOA) says the coconut crab found on Oahu weighed 3 pounds and was 16 inches long (40 centimeters) from leg-to-leg. The crab was captured by a resident and placed in a cardboard box.

KHON 2 reports that coconut crab weighed 4.8 pounds, which is somewhat larger than the HDOA's description. A large number of these crabs on the Hawaiian islands could cause widespread damage to Hawaii's plants and wildlife. Rob Toonen, Ph.D. professor at Hawaii Institute of Marine Biology at University of Hawaii, told KHON 2 that the trash can sized crabs can rip things open.

Toonen says, "They'll raid people's trash cans. Eat native birds. Eat juvenile plants. And tear up the landscape if they're here. They grab a hold of things. Can rip them open. Can bust open a coconut. And the idea of that crawling around in their backyard is not going to be very pleasant to most people in Hawaii."

It is not known where this particular coconut crab came from. It is possible someone was keeping the illegal species as a pet and released it. Take a look: