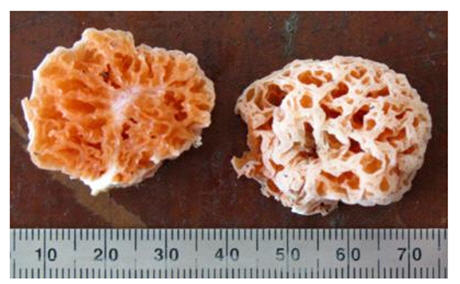 A new species of mushroom, Spongiforma squarepantsii, has been named after SpongeBob Squarepants. The strange mushroom, which is shaped like a sea sponge, was discovered in the forests of Burneo.

S. squarepantsii is a bright orange fungus found in 2010 in the Lambir Hills in Sarawak, Malaysia by researchers from San Francisco State University. Under a scanning electron microscope, the spore-producing area of the fungus looks like a seafloor carpeted in tube sponges. The fungus has a "fruity or strongly musty" smell according to the researchers. The fungus turns purple when sprinkled with a strong chemical base. The mushroom, which lacks a cap and stem, even acts like a sponge when squeezed.

Dennis Desjardin, a professor in ecology and evolution in the SFSU Biology Department, says, "It's just like a sponge with these big hollow holes. When it's wet and moist and fresh, you can wring water out of it and it will spring back to its original size. Most mushrooms don't do that."

An article about the new discovery was published online on May 10, 2011 in Mycologia.