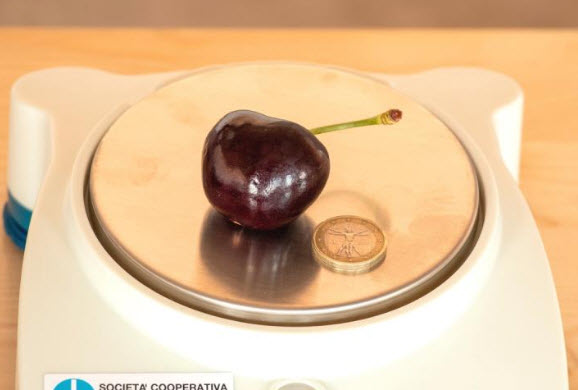 This is the heaviest cherry in the world. The sweet cherry known as a "Sweet Stephany" weighs 26.45 grams and beats the previous record of 23.93 grams. The record was confirmed by Guinness World Records.

The cherry was grown in Salvi's experimental cherry garden in Runco di Portomaggiore (Ferrara, Italy). The breeding program that developed the Sweet project started thirty years ago at the University of Bologna. The project coordinators, Professor Emeritus Silviero Sansavini and Dr Stefano Lugli, carried out a long process of breeding and selection using traditional methods to grow the large sweet cherries.

Stefano Tartarini, a professor at the Department of Agricultural and Food Sciences of the University of Bologna and current supervisor of the sweet cherry project, says, "We have devoted more than ten years to the research and development of this family of cherries. This great achievement makes us very proud, as it shows the relevance of the work we did."

Silvia Salvi, CEO of Salvi Vivai, says in a statement, "Experimenting with new varieties is a costly endeavour. Each treatment and its consequences on the final product must be carefully evaluated. Each year, we need to gauge the amount of water and supplements as well as the agronomic treatments to secure a constant improvement. Having bred a record-winning cherry highly rewards our team effort."

This video shows the cherry farm in Italy where the heaviest cherry was grown.