Bat Flies Likely Use Bacteria to Find Bats to Bite 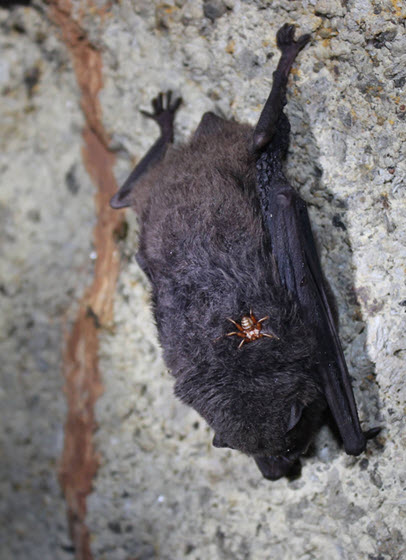 A new study has found that the bat fly likely uses bacteria to help it locate bats to feed on. The scent of chemicals produced on the bats' skin are the target of the blood-sucking flies. The image above shows a natal long-fingered bat parasitized by a male bat fly.

Holly Lutz, the lead author of the paper, and her colleagues took skin and fur samples from the bats in order to examine both the bats' DNA and the microbes living on their skin. The researchers also examined the bats for flies.

Carl Dick, a research associate at the Field Museum, says the method the flies use to locate their bats has previously been a mystery. The flies cannot fly and have reduced eyesight but still manage to easily find bats to live and feed on. Once the fly finds a bat it is a very persistent pest. The flies have evolved to live on their bats.

Lutz says, "You brush the bats' fur with your forceps, and it's like you're chasing the fastest little spider. The flies can disappear in a split second. They are fascinatingly creepy."

Dick says, "The flies are exquisitely evolved to stay on their bat. They have special combs, spines, and claws that hold them in place in the fur, and they can run quickly in any direction to evade the biting and scratching of the bats, or the efforts by researchers to capture them."

The team found that the different bat families had their own unique combinations of skin bacteria, even when the bats were collected from different locations. Next the researchers need to isolate the actual chemicals attracting the flies so they can definitively say that the bacteria are leading the flies to their hosts. Other blood sucking insects may use the same bacterial chemical technique to help them find specific mammal species to bite.

Lutz says, "You know when you go to a barbeque and your friend is getting bombarded by mosquitos, but you’re fine? There is some research to support the idea that the difference in mosquito attraction is linked to your skin microbiome - the unique community of bacteria living on your skin."

The research paper was published in Molecular Ecology.