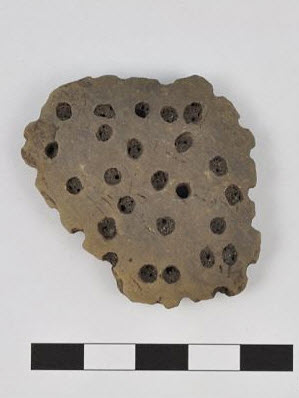 Scientists led by the University of Bristol have uncovered fragments of ancient sieve vessels that indicates human first began making cheese over 7,000 years ago. A sieve fragment found in a clay pit in north-central Poland is pictured above. The fragment was part of a sieve vessel that would have been close in shape to modern cheese strainers. The researchers used lipid biomarker and stable isotope analysis that found milk residues on the ancient pottery fragments.

Melanie Salque, a PhD student from the University of Bristol, said in a release, "Before this study, it was not clear that cattle were used for their milk in Northern Europe around 7,000 years ago. However, the presence of the sieves in the ceramic assemblage of the sites was thought to be a proof that milk and even cheese was produced at these sites. Of course, these sieves could have been used for straining all sorts of things, such as curds from whey, meat from stock or honeycombs from honey. We decided to test the cheese-making hypothesis by analysing the lipids trapped into the ceramic fabric of the sieves. The presence of milk residues in sieves (which look like modern cheese-strainers) constitutes the earliest direct evidence for cheese-making. So far, early evidence for cheese-making were mostly iconographic, that is to say murals showing milk processing, which dates to several millennia later than the cheese strainers."

The research was published here in the journal Nature.