Milky Way is Much Larger Than Previously Thought 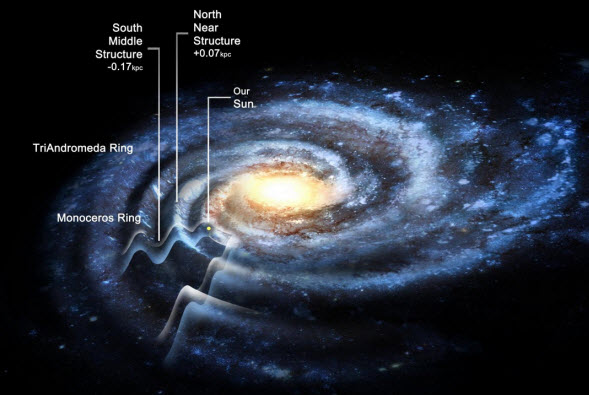 A new study has found that the Milky Way galaxy is at least 50% larger than previously thought. The new findings from an international team of scientists indicate the galactic disk is contoured into several concentric ripples. The research was led by Rensselaer Polytechnic Institute Professor Heidi Jo Newberg. The above image shows how the Milky Way galactic disk is a corrugated galaxy with concentric ripples. The study analyzed data from the Sloan Digital Sky Survey.

Newberg says in a statement, "In essence, what we found is that the disk of the Milky Way isn't just a disk of stars in a flat plane--it's corrugated. As it radiates outward from the sun, we see at least four ripples in the disk of the Milky Way. While we can only look at part of the galaxy with this data, we assume that this pattern is going to be found throughout the disk."

The astronomical data from the Sloan Digital Sky Survey was obtained in 2002. The survey established the presence of a bulging ring of stars beyond the known plane of the Milky Way. The new findings show that the features previously identified as rings are actually part of the galactic disk. This extends the known width of the Milky Way from 100,000 light years across to 150,000 light years.

Yan Xu, a scientist at the National Astronomical Observatories of China and lead author of the paper, says, "Going into the research, astronomers had observed that the number of Milky Way stars diminishes rapidly about 50,000 light years from the center of the galaxy, and then a ring of stars appears at about 60,000 light years from the center. What we see now is that this apparent ring is actually a ripple in the disk. And it may well be that there are more ripples further out which we have not yet seen."

A research paper on the findings, "Rings and Radial Waves in the Disk of the Milky Way," was published here in the journal, Astrophysical Journal. Here is a video with Professor Heidi Jo Newberg explaining the corrugated Milky Way galaxy.

This image shows the density of light detected in the Milky Way and reveals a ripping contour. 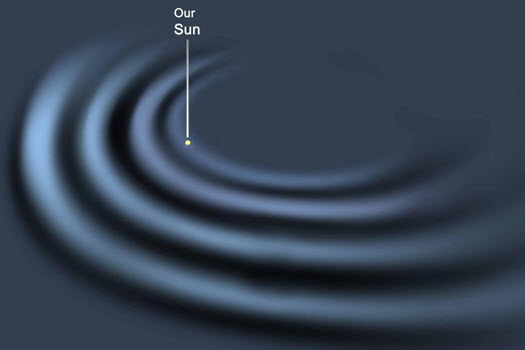