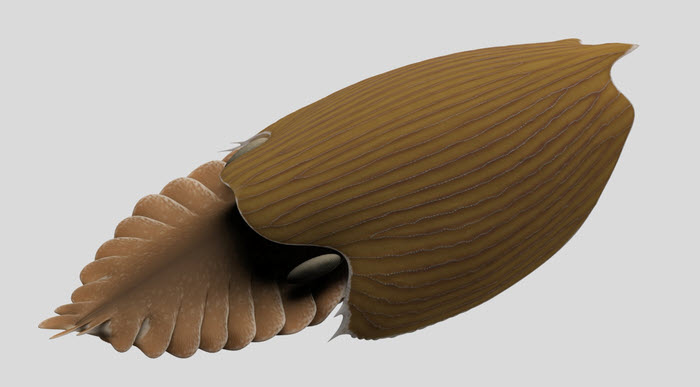 Paleontologists from the Royal Ontario Museum have discovered the fossil of a large ancient creature in 500 million year old Cambrian rocks from Kootenay National Park in the Canadian Rockies. The newly identified species, Titanokorys gainesi, had an estimate length of about half a meter (1.6 feet).

The large size makes the creature one of the largest known animals from the Cambrian period. Most of the creatures known to science that lived on Earth during this period were no larger than a pinky figure. The illustrations by Lars Fields show a reconstruction of Titanokorys gainesi as viewed from the side (above) and the front (below).

Jean-Bernard Caron, ROM's Richard M. Ivey Curator of Invertebrate Palaeontology, says in the announcement, "The sheer size of this animal is absolutely mind-boggling, this is one of the biggest animals from the Cambrian period ever found."

Titanokorys is described by the researchers as having multifaceted eyes, a pineapple slice-shaped, tooth-lined mouth, spiny claws below its head and a series of flaps on its body for swimming. The creature would have used the claws to capture prey.

Joe Moysiuk, co-author of the study, and a ROM-based Ph.D. student in Ecology & Evolutionary Biology at the University of Toronto, says the new species belongs to a group of group of primitive arthropods called radiodonts, called hurdiids, that are characterized by an incredibly long head covered by a three-part carapace. He describes these types of creatures as "really little more than swimming heads."

Caron also says, "These enigmatic animals certainly had a big impact on Cambrian seafloor ecosystems. Their limbs at the front looked like multiple stacked rakes and would have been very efficient at bringing anything they captured in their tiny spines towards the mouth. The huge dorsal carapace might have functioned like a plough." 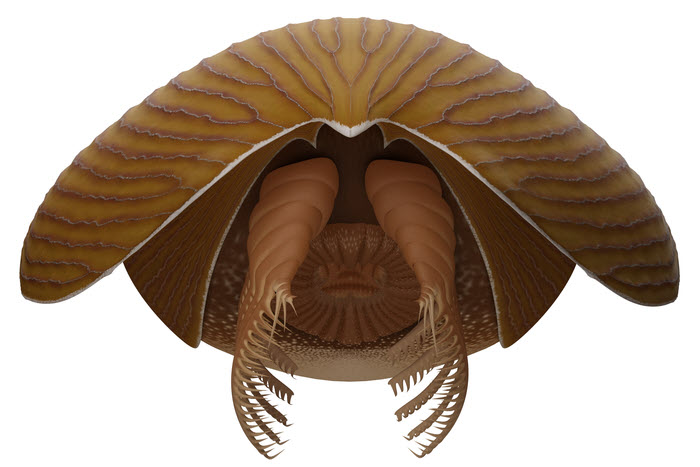 The site where Titanokorys was discovered is one of Canada's Burgess Shale fossil sites which was designated a UNESCO World Heritage Site in 1980. A research paper on the findings were published in Royal Society Open Science.