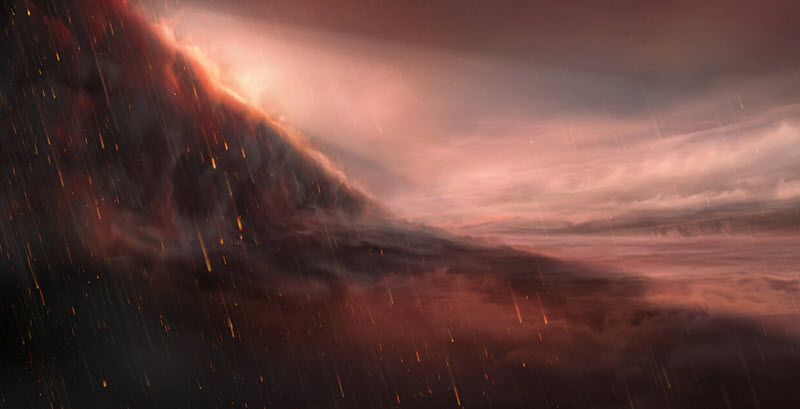 Astronomers using ESO's Very Large Telescope (VLT) recently observed a planet suspected of having liquid iron as a precipitate. The ultra-hot giant exoplanet, WASP-76b, has a day side where temperatures reach over 2400 degrees Celsius. This is hot enough to vaporize metals. Strong winds carry iron vapor to the cooler night side where it condenses into iron droplets.

María Rosa Zapatero Osorio, an astrophysicist at the Centre for Astrobiology in Madrid, Spain, says in the announcement, "The observations show that iron vapour is abundant in the atmosphere of the hot day side of WASP-76b. A fraction of this iron is injected into the night side owing to the planet's rotation and atmospheric winds. There, the iron encounters much cooler environments, condenses and rains down."

Dr David Ehrenreich from the University of Geneva told BBC News, "Imagine instead of a drizzle of water droplets, you have iron droplets splashing down."

The unique planet is located 640 light-years away from Earth. A research paper on the discovery can be found in the journal, Nature.